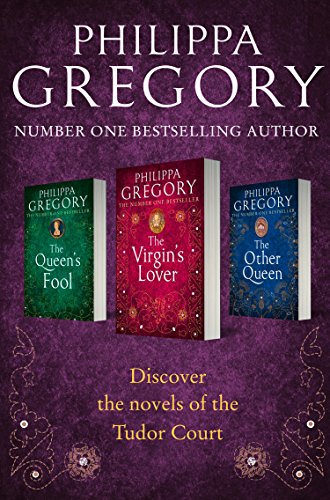 From the bestselling author of THE WHITE QUEEN, now a hit BBC TV production - the last three novels of her Tudor Court series: THE QUEEN’S FOOL, THE VIRGIN’S LOVER and THE OTHER QUEEN

THE QUEEN’S FOOL is a stunning novel set in the Tudor court, depicting the rivalry between Queen Mary and her half-sister Elizabeth, played out against a background of betrayal, conflict and passion. Elizabeth’s bitter struggle to claim the throne she believes is hers by right, and the man she desires almost more than her crown, is watched by her ‘fool’: a girl who has been forced to leave her homeland of Spain, as a Jew fleeing the Inquisition. In these dangerous times, a woman must choose between ambition… and love.

THE VIRGIN’S LOVER is a sumptuous historical novel set in the court of Elizabeth I, who has acceded to the throne of England, a position she has waited and schemed for all her life. She is surrounded by advisers, all convinced that a young woman cannot form political judgements. Elizabeth feels that she can rely on just one man: her oldest friend, Robert Dudley. As the pressure grows for Elizabeth to marry, her preference is clear, but he is unavailable. But what if the unthinkable were to happen… In a blend of passion, personalities and politics, this is a stunning novel of the Tudor court and a country divided.

In the final book of the Tudor Court series, THE OTHER QUEEN is a dramatic novel of passion, politics and betrayal. Mary, Queen of Scots, is fighting to regain her kingdom whilst under the guard of Queen Elizabeth’s trusted accomplice, Bess of Hardwick. Bess is a self-made woman, a shrewd survivor. She is newly married to her fourth and most distinguished husband, the Earl of Shrewsbury. But what marriage can withstand the charms of Mary? Or the threat of rebellion that she always carries?

With her characteristic combination of superb storytelling and authentic historical background, Philippa Gregory brings to life this period of great change, in a riveting tale of betrayal, loyalty, politics and passion.