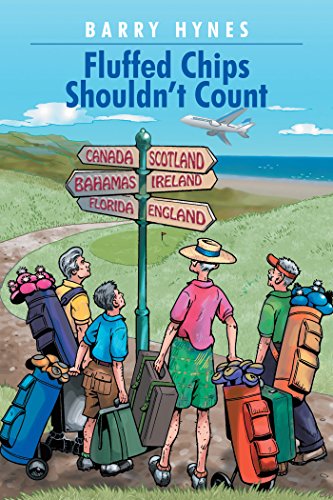 There are many books that detail the lone golfers ever-failing battles with the golf course. While Fluffed Chips Shouldnt Count again shows how the courses, despite their different natures and settings, continue to triumph, it also shows there is much solace in the companionship of good friends who frequently suffer similar fates.
Fluffed Chips Shouldnt Count traces the developing friendship of four aspiring golfers over a period of forty years when they met while working in Nassau in those idyllic Bahamian islands. Between the years of 1972 to 1980, they somehow scraped through (sometimes literally) a long initiation at the hands of the brutal Coral Harbour Golf Course (RIP) and became firm friends.
In the late 1970s, they returned to their native lands and became involved in the chores of domesticity and fatherhood. But the friendships were strong and survived distance and time, and in 1994, with the obligations of family waning slightly, they met again to play golf in Scotland. Such was their enjoyment and renewed camaraderie that they made a commitment to meet and play every two years in different parts of the world.
In that period, from 1994 to the present, they have played in England, Scotland, Ireland, Canada, America, and the Bahamas. They have aged and become more realistic about their golfing abilities, but they remain unbowed, and Chris still harbours hopes of turning pro.