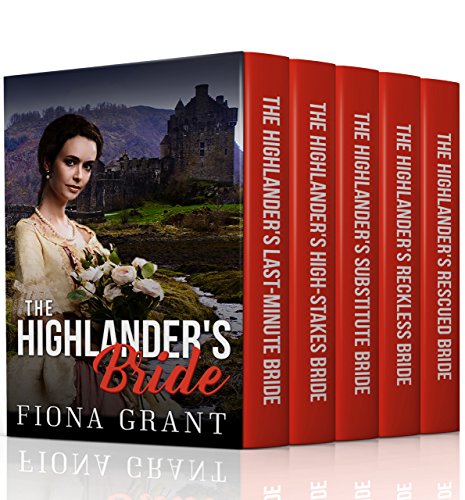 “A great read! The story moves right along…”
Enjoy five fast-paced, engrossing stories about Highlanders and their brides

Jane MacKay has little choice: if she does not agree to wed lecherous old Laird Sutherland, her terrified younger sister Heather will be handed over to him in her stead.

Jane cannot allow that to happen. With a heavy heart, she leaves behind her home (and her dreams) and journeys to the Sutherland Keep to marry a man whose infamy has spread far and wide — a man who has already buried two wives.

But fate takes a hand, and while Jane rejoices, her father is aghast when he learns that the new alliance seems doomed. He is not one to give up easily, however….

Gareth and Brodie Hay have a not-so-shiny reputation in the highlands: brothers born just a twelvemonth apart, they are famous for their carousing in the local tavern: sampling the ale, teasing the wenches, and remaining unbeaten in games of chance.

But when their mother Anna Hay becomes seriously ill, their father insists that one of them must take a wife to help run the keep and tend to his precious Anna. Neither wants to give up their free and easy lifestyle — so they decide to let a throw of the dice determine who will be the unfortunate groom. But then, who will he marry?

The ever-inventive Hay brothers come up with a solution that lands them in more hot water than they ever expected. The lass who is chosen soon lets them know she is not one to meekly accept the role of a passive highlands wife, and leads her new husband a merry dance!

Crissa and Owena Macleod, auburn-haired twins who are impossible to tell apart, have always been close. As children, one of their favorite games was to pretend to be each other to confuse their family and friends.

Crissa thinks she may never recover from losing both her husband and her darling child, and spends her days quietly in the Maclean Keep — until one day her twin, Owena, comes to her begging for help. Owena has fallen in love with a dashing young man who does mysterious work for the King. To her dismay, her father has arranged her betrothal to Kenrik Maclean. With tears in her eyes, Owena exerts all her wiles to persuade Crissa to take her place…

Owena Macleod, daughter of Laird Iain Macleod and twin sister to Crissa, has always yearned for an adventurous life. When her father arranges her betrothal to Laird Kenrik Maclean, she cannot bear the thought of such a constrained life — especially now that she has fallen in love with a brave and dashing King’s spy!

She pleads with her twin Crissa to take her place in the nuptials, and Owena takes her name and slips away to marry her spy, breathlessly anticipating a life of adventure.

Barely two months into her marriage, she realizes that her husband is not the man she thought. She finds herself in a great deal of trouble. Who is this hard-eyed man who has been following both Owena and her husband? And what does he have in mind for Owena?

Anice Gordon has been a sore trial to her parents from the day she was born. Headstrong, impulsive and forever in trouble, she is a lass who seems to attract disaster.

Robert Ogilvy, her brother Donal’s best friend, grew up having to rescue Anice from one mishap after another. He is fond of his friend’s wee sister, but when Anice's father announces that the two shall be betrothed, Robert finds it hard to hide his dismay. Wee Anice? This tearaway lass with a bawdy sense of humor and stick-straight tangled straw hair? How could he think about her as a wife and Lady of the Keep?

Nevertheless, 3 years later, on Anice’s 15th birthday, they are wed. Before long, Robert finds himself yet again rescuing Anice Gordon... but this time, she's in real trouble!