Chasing Kona: From back of the pack smoker to racing the Ironman World Championships in Kona (English Edition) por Rob Cummins 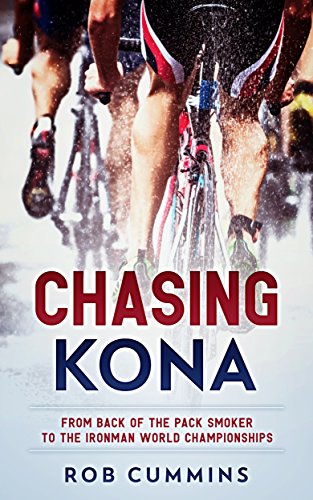 Rob Cummins con Chasing Kona: From back of the pack smoker to racing the Ironman World Championships in Kona (English Edition)

Sitting watching TV with a cigarette in one hand, a black coffee in the other and nursing a crushing hangover I switched channels until I found sports. There was some sort of bike race on and I half watched while lighting another cigarette off the butt of my last one for a minute before switching channels again.
Just as I hit the button on the remote the commentator mentioned something about the athletes swimming before and running afterwards as well as racing the bike. I thought he said something about the run being a marathon but that couldn't be right.
This sparked my interest and I switched back, but he was talking about something else so I waited for him to get around to describing exactly what this race was. I didn't have long to wait as he said they first did a 2.5 mile swim, then 112 miles on the bike all topped of with running a marathon. I was stunned. I didn't think that would be physicially possible and as I lit another cigarette I wondered how many days did they have to do it. I guessed it would have to be three days. Swim the first day, bike the second and run the third but it still sounded like a crazy thing to do.
Then he said that they did it all in the one day, one after another without stopping. I was completely incredulous. And hooked. I remained glued to the TV and learned that these bronzed, muscular Greek God looking athletes weren't all professionals either. There was an amateur or "age group" race as well Although I could hardly tell the difference between the pros and amateurs. They all looked unbelievably fit. As I sat there mesmerised I swore to myself that I'd race there someday. I'd stop smoking and drinking and somehow do "The Ironman"

At the time I had no idea what that meant or how I would do it and after a while as things have a way of doing I got busy with life and I forgot all about The Ironman and Hawaii. I forgot until several years later when I had actually given up smoking and had taken up triathlon.

It had taken me two years and sixteen races of swimming breast stroke before I learned to swim properly. I never once looked even remotely like Kona material but I wanted to have a go at doing an Ironman. It took another three years before I plucked up the courage and lined up for my first one in Nice, France. I finished in the last quarter of the field, hours behind the athletes racing for those precious Kona slots.

Nothing I had done up to then had given any indication that I should have had a reason to believe I had a chance at qualifying, but three years later when I asked Aisling, my wife if she thought it was possible she immediately said yes and then she added let's do it.

Aisling's belief in me started us on a journey that led to me treading water on the most iconic start line in triathlon, waiting for the cannon to fire at the start of the Ironman World Championships in Hawaii.

This is how we overcame all of the odds and discovered what it would take to get to the Ironman World Championships.

This is our Kona story.