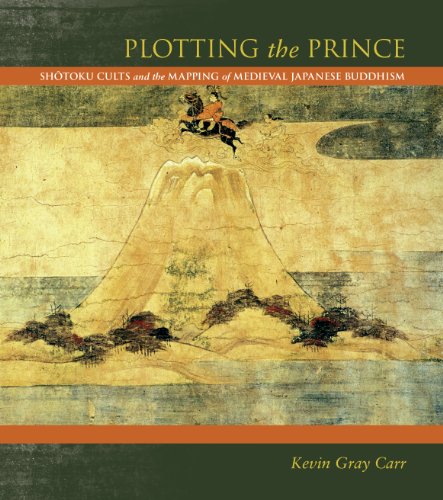 Plotting the Prince traces the development of conceptual maps of the world created through the telling of stories about Prince Shotoku (573?–622?), an eminent statesman who is credited with founding Buddhism in Japan. It analyzes his place in the sacred landscape and the material relics of the cult of personality dedicated to him, focusing on the art created from the tenth to fourteenth centuries. The book asks not only who Shotoku was, but also how images of his life served the needs of devotees in early medieval Japan.

Even today Shotoku evokes images of a half-real, half-mythical figure who embodied the highest political, social, and religious ideals. Taking up his story about four centuries after his death, this study traces the genesis and progression of Shotoku’s sacred personas in art to illustrate their connection to major religious centers such as Shitenno-ji and Horyu-ji. It argues that mapping and storytelling are sister acts—both structuring the world in subtle but compelling ways—that combined in visual narratives of Shotoku’s life to shape conceptions of religious legitimacy, communal history, and sacred geography.

Plotting the Prince introduces much new material and presents provocative interpretations that call upon art historians to rethink fundamental conceptions of narrative and cultic imagery. It offers social and political historians a textured look at the creation of communal identities on both local and state levels, scholars of religion a substantially new way of understanding key developments in doctrine and practice, and those studying the past in general a clear instance of visual hagiography taking precedence over the textual tradition.