With the Courage of Desperation: Germany's Defence of the Southern Sector of the Eastern Front 1944-45 por Rolf Hinze 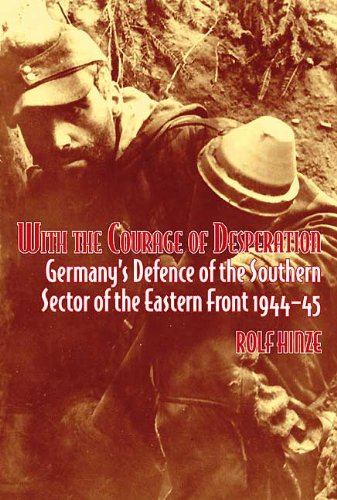 Rolf Hinze con With the Courage of Desperation: Germany's Defence of the Southern Sector of the Eastern Front 1944-45

In his historical series Hinze provides the only comprehensive account of events on the central and southern portions of the German Eastern Front during the years of German retreat. This volume covers events on the southern portion of the Eastern Front from July 1944, in the aftermath of the cataclysmic defeat of Heeresgruppe Mitte, through the Soviet drive to victory.

Events covered include the retrograde fighting of 4th Panzer-Armee, the situation on the flanks of Heeresgruppe Nordukraine, operations around Lemberg, and the settling of positions along the line of the Vistula river. The Soviet drive through Rumania against Heeresgruppe Südukraine is described, leading to the fall of Bucharest before the panorama moves into the Hungarian Puszta. The German attempts to stem the Soviet drive on Budapest, the Gran bridgehead and the last great German offensive of the war, Operation 'Spring Awakening' are all recounted, as is the steady and now inevitable final withdrawal and defeat of the remaining Axis forces as the Soviets penetrate into Austria. The fall of both Budapest and Vienna are related, before Hinze completes his study with the final battles in Austria and the area north of the Danube.

Hinze's accounts are indispensable to any study of the decline and collapse of the German Eastern Front, and are published by Helion across three volumes - the great retreats across the Ukraine to the borders of Hungary and Rumania, and the evacuation of the Crimean Peninsula (Crucible of Combat), the fate of Heeresgruppen Nordukraine, Sudukraine and Sud-/ Ostmark in 1945 (this volume) and the battles of Heeresgruppe Nordukraine/A/Mitte ('To the Bitter End'). There are no other detailed but comprehensive accounts in which the various individual narratives, unit histories and studies of individual battles may find their place in relation to the big picture. Hinze's maps, alone, would justify his works, for most of the unit histories, narratives and studies of individual battles lack maps illustrating their place in the larger geography of the war. The study is complemented by orders of battle, the aforementioned maps (over 80 of them), plus photographs. Publication of With the Courage of Desperation completes Hinze's trilogy, and represents a keystone to our understanding of the Soviet-German War 1941-45.