Walking the Himalayas: An adventure of survival and endurance por Levison Wood 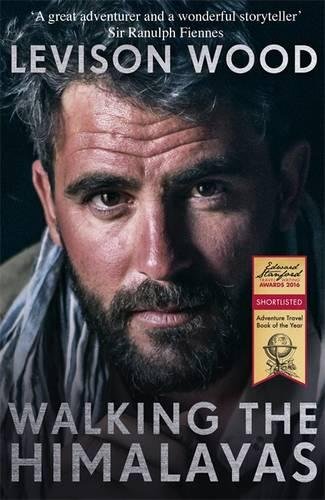 Levison Wood con Walking the Himalayas: An adventure of survival and endurance

'Levison Wood is a great adventurer and a wonderful storyteller.' Sir Ranulph Fiennes

'Britain's best-loved adventurer... he looks like a man who will stare danger in the face and soak up a lot of pain without complaint.' The Times

Following in in the footsteps of the great explorers, WALKING THE HIMALAYAS is Levison Wood's enthralling account of crossing the Himalayas on foot. His journey of discovery along the path of the ancient trade route of the Silk Road to the forgotten kingdom of Bhutan led him beyond the safety of the tourist trail. There lies the real world of the Himalayas, where ex-paratrooper Levison Wood encountered natural disasters, extremists, nomadic goat herders, shamans (and the Dalai Lama) in his 1,700-mile trek across the roof of the world. WALKING THE HIMALAYAS is a tale of courage, stamina and the kindness of strangers that will appeal to the adventurer in us all.

Review
Britain's best-loved adventurer... he looks like a man who will stare danger in the face and soak up a lot of pain without complaint. (The Times)

In the macho, adrenaline-fuelled arena of TV adventurers, Levison Wood is that rare beast: the real deal. (Radio Times)

Wood's USP is that, unlike a great many pretenders, he is the real deal: a former paratrooper, a major in the army reserves and as hard as nails. (Telegraph)

Adventurer Levison Wood is 'bewildered' by being called a sex symbol, as a death-defying trek through the Himalayas is set to have fans' pulses racing. (Daily Mail)

Levison Wood is a great adventurer and a wonderful storyteller. (Sir Ranulph Fiennes)

Levison Wood is a best-selling author, explorer and photographer. His work has taken him around the world leading expeditions on five continents and he is an elected fellow of both the Royal Geopgraphical Society and the Explorers Club. His work in journalism has led him to enter the world of documentary film-making and he has collaborated on productions with National Geographic, Animal Planet, Channel 4 and the BBC. Levison spent a number of years as an Officer in the British Parachute Regiment, where he served in Afghanistan. He is also an ambassador for a number of charities including ABF The Soldiers' Charity and The Tusk Trust. He is patron of AMECA and a keen supporter of the Duke of Edinburgh's Award.